You can easily get to Sysmä or near by areas. 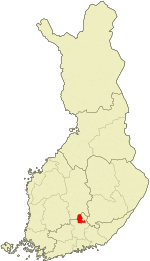 South Päijänne can also be reached by bus. There are good bus connections to Lahti, from which there are further connections to Asikkala, Padasjoki or Sysmä.
Bus timetables: Matkahuolto

The nearest train station is located in Lahti. VR operates several trains a day to Lahti from all over Finland. From Russia it’s easies to travel by the Allegro train. The time from Helsinki to Lahti is under an hour at its fastest and from St Petersburg it takes around 2½ hours.